This was the first time for me to attend an anime convention. Although I've been to a couple Star Trek conventions and a ham radio convention, this was unique because of the sheer magnitude. This is one of the largest anime conventions in the United States.

My primary purpose for going was to become familiar with anime conventions. Sometime in the future, I plan on getting vendor space and marketing 2214. Of course, that would be much later down the road.

It took about 6 hours to drive up there. The navigation part was easy, due to the fact that I drove entirely by computer. The GPS module in the Saturn showed my position on an interstate roadmap, my heading, the highway exits to take, you name it... those of you who are familiar with GPS know what I'm talking about. Otherwise I would have gotten lost and wound up in Mexico. That is bad, considering I was coming from Cincinnati.

Would you believe that I did not make a single wrong turn? GPS is great. Something drove me crazy and caused nightmares when crossing the border of Indiana and Illinois. See, Indiana doesn't ban fireworks, whereas Ohio and Illinois do - causing MILLIONS of billboards for fireworks stores to spring up near the borders.

I swore that if I saw one more billboard for "Krazy Kaplans" fireworks, I was going to explode just like one of their firecrackers. These billboards were not just irritating, they were downright scary. They featured an insane cartoon guy holding a lit firecracker (yes, insane people, come buy our explosives and do insane things with them!) You know, that guy on the billboard looked like a freaky child molester or something, I swear. He popped up on the billboards at least 25 times during the trip.

I left from Cincy around 10:00 am EST. I arrived at the DoubleTree hotel around 4:30 pm CST. My watch, of course, became an hour fast upon leaving Indiana. The whole place around the hotels and convention center was very crowded. I finally got some money from the ATM inside the DoubleTree so that I could park. 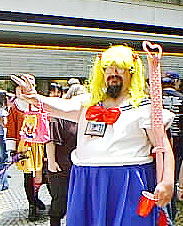 Checking in was the first of long waits in line, despite the fact that I had a reservation. When I got to my room, I was rather disappointed to learn that the high-speed internet access they advertised was only available in the lobby. That seriously sucked - I hooked my notebook PC up to the data port only to get no connection. Ha ha ha. No email checking for me (other than the account that fowards directly to my phone text messages).

Like a complete doofus, I went straight to the convention center lobby and stood in line. The line didn't move very fast. After 45 minutes, I noticed that everyone in line already had badges. It was at this glorious moment of revelation that I realized something important - this wasn't the registration line.

Let me take a moment to explain that I wasn't pre-registered, because I hadn't planned on going until after the pre-registration was already closed. Next year, new plan - pre-register or don't go. Here is why:

When I went to the Hyatt to get in the REAL registration line, I almost died. The line stretched waaaaaay outside the building into the parking lot. So I went out there and stood. For almost four hours.

What really made the wait easier was that the guy next to me in line and I carried on an interesting conversation the whole time. He was carrying slips of paper and leaving notes at various places in line: 1 hour, 3 hours, 1 day, 1 week... and so forth, to project estimated total waiting times for certain points in line. It wouldn't be surprising to see a skeleton here and there in line. 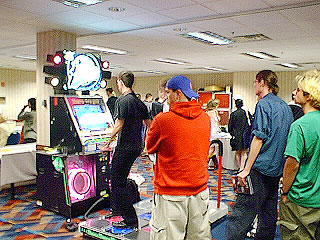 Finally, I got the badge and went to enjoy the convention. My first stop was to get some food. What?! NO POCKY?!

That's right, they were not allowed to sell it. Apparently, the hotel had all food vending priveledges, so there wasn't any candy or snacks for sale at all.

I had dinner at the Hyatt's restaraunt. Afterwards, I went to the video rooms, the gaming rooms, etc. and took a whole lotta photos.

They had a lot of cool games, but I was disappointed not to see any Final Fantasy or XenoSaga. . . or maybe that was in the role-playing room.
They have games now that involve an extreme amount of physical exertion. Good idea - most gamers haven't had much exercise due to sitting in front of the screen.

These games are "Dance Dance Revolution", and "Para-Para Paradise", which involve techno music, lots of flashing lights, and pressure / movement sensors. The goal of these games is to make the right steps / physical movements according to on-screen cues and the beat of the music. Looked like fun, but I'm in no condition to play. What's really cool is that these games could bring back the video arcade, a nostalgic bit from when video game equipment wasn't readily available in every home in the nation. These dance games are already a huge hit over in Japan, perhaps they will catch on in the "mainstream" culture here in the U.S.? Maybe, if we are not all too fat and lazy from our at-home gaming.

The highlight of my trip to Anime Central 2003 had to be the MegaTokyo stuff, since I'm not only a fan, but MegaTokyo is what gave me the idea to turn the script for "2214" into an online comic.

Dom was telling us all about the problems he encountered at L.A.X. Airport.
Remind me never to fly.

What was really impressive is that the people of MegaTokyo do a great job conveying the whole look and feel of the comic in live action. Fred Gallagher was even dressed up in that costume - someone even had enough nerve to ask him if he was wearing anything underneath. Too much information!

It was also amuzing how many people asked Dom to strip. Again, I am scared. Fortunately, the crew tied Dom down with duct tape before he could do it. Needless to say, these webcomic people have a great stage presence, too! The show was very entertaining.

Afterwards, I went to the exhibition hall to buy some stuff.

Around 2:45, I took my place in line to get Autographs / drawings from Fred, Seraphim, and Dom. At the autograph table, one of the people with them noticed my name tag "Nitrocosm" and recognized me as an advertiser. Yep, I need to buy more impressions there, soon. 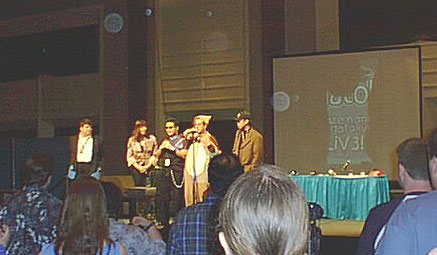 Dom drew one of his famous stick-figure drawings, featuring the Vibrating Sheep of Death! Seraphim signed my sketchbook, too.
Fred signed it and drew a quick sketch of Piro, which came out quite nice.
I had been guessing the order in which he would draw the features, and I was right!

After that, I went to eat, again. Oh, yeah, I had breakfast at the DoubleTree that morning, which was awesome. This time, I had steak at the Hyatt.

The food was very expensive, but good.
The rest of the time, I took photos of cos-players and the gaming room.
I had to leave first thing Sunday. It took me around 6 hours to drive back to Cincinnati. Unfortunately, I didn't get to see the "Iron Guest" competition featuring Fred Gallagher, but maybe next year. Again,the GPS made it a breeze to navigate back home, and I stopped once for gas in Lafayette, Indiana, and a bit later somewhere off of I-70 (after Indianapolis) for lunch at Subway.

My next convention is going to be Ikasucon, at the Cincinnati convention center.