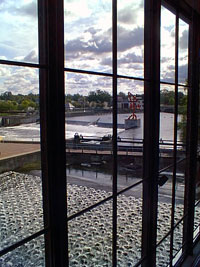 Another convention I attended this year was C-kon, in South Bend, Indiana. The drive was almost as far as Chicago, but with less traffic and more one-way roads to trick me. However, I arrived on time Friday, pre-registration and all. Checking into the hotel, parking, and getting my 3-day badge was a breeze. Since this is a MUCH smaller convention than Anime Central, there was no waiting in line.
The main reason I attended was to meet some of the 2214 readers: Atropos, Skeith, and Kyler. The second reason I came was to attend the Megatokyo panels. It was rather strange that it wasn't until after the Megatokyo panels that we were able to meet. That was partially due to the fact that my badge kept flipping over, hiding my name.

The hotel rooms had high-speed internet access, although I did not use it. One thing about the hotel that was not favourable to me was the fact that I asked for a non-smoking room... and they gave me a "non-smoking" room... complete with a strong lingering odour of smoke and a cigarette butt floating in the toilet. Needless to say, I complained, but nothing could be done about it. My allergies bothered me all weekend after sleeping there. To those allergic to cigarette smoke: Do NOT stay at the South Bend Mariott! There ARE no true non-smoking rooms! There, I said it.

In contrast to the room, the food was GREAT. I ate at the hotel restaraunt for every meal.

There were many great guests at this convention, including Fred 'Piro' Gallagher and Tristan MacAvery. Of course, I'm not one to walk up to anyone and say hi... it's just not me. Well, that meant I didn't bother the guests... and perhaps accidentally went as far as to avoid them... in order to not appear to be pestering them.

Something happened Saturday morning, as I was eating breakfast. Sitting there, eating alone, and quietly planning my day, it never dawned on me that I appeared isolated. Seeing how Atropos, Kyler, and Skeith hadn't found me yet, I had been spending all of the time keeping to myself. So, much to my surprise, Tristan MacAvery walks over and says hello!

For those of you who don't know, Tristan MacAvery is a famous voice actor, well known for being the voice of Gendo Ikari from Neon Genesis Evangelion. I'm a big fan. It was really cool that he was kind enough to come over and talk to me at breakfast. This indeed was a moment I will never forget.

Later in the day, I attended both Megatokyo panels. Before the con, I didn't know there was going to be a web comic panel (I had offered to do one, now I know why there was no response!), so it was a surprise. The second panel was the actual webcomic panel, in which Piro went into some detail about cleaning up drawings, and composition of the pages for the web. It was interesting how similar his technique was to mine... with some differences, of course.

He showed us how he uses the tablet for post-scan retouching (I use the tablet to draw the whole thing now) and uses Adobe Illustrator for composing the pages (I use Photoshop for composition).

I got to ask the first technical question, and was able to briefly discuss my techniques with him. Note that using Illustrator leaves the vector information intact, allowing finer resolution if the comic pages go to print (which Megatokyo has). 2214's created strictly for screen, so I skip the vector part altogether.

Between main events, I spent most of my time watching different anime programs in the video rooms, and walking around, drinking coffee and snacking. After the panel (with which I was very pleased), I finally met Atropos. We walked around for a while until we eventually bumped into Kyler and Skeith.

It was very cool meeting them.

We watched some more anime, and attended some of the game shows that were going on. Kyler went to the game rooms for a while and I went to get dinner with Atropos and Skeith. 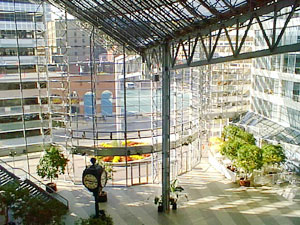 C-kon was pretty cool. The Century Center has some great architecture, and the place is worth visiting, just to see the way it's built. One of the waiters at the hotel restaraunt told me that the place was originally designed for somewhere in Texas, but the plan was changed at the last minute to be used for the hotel & convention center in South Bend, Indiana, where it is today (obviously, otherwise the whole freakin' convention would have been outdoors :-P ) The problem with building this place in Texas is that the greenhouse effect would be overwhelming.... the entire place is glass.

That's all for C-Kon. I might attend next year, if there's time.