Messing Around with the HTC Droid Eris

A little over a week ago (January 5, 2010) I decided to upgrade my phone from the Motorola Q after almost three years. Since I have Verizon and get a credit toward a new phone every two years, the new phone ended up being $50 after the rebate. It's an HTC Droid Eris, which runs the Android OS.

It's a good, solid, responsive device. After setting up all of the applications that I wanted and customizing the home screens, it proved to be a lot more useful than my previous, outdated phone. I installed an SSH client, Google's Sky Map, a barcode reader, some GPS applications, and a few other odds and ends.

It's fun running around the house scanning all of the barcodes on various items and seeing if the barcode search turns up information on the product. Not everything is in the database, of course, but the vast majority of scannable items turned up something either as a product search or as a regular web search on the UPC code.

The SSH client is handy in a pinch but I wouldn't want to use it on a regular basis for server administration. The virtual keyboard on the phone (there's no physical keyboard like the Motorola Droid but I chose the Eris in part because of this; I like to clean my gadgets off regularly and the simple touch screen makes this easier.

The sky map is really amazing; it displays the section of sky you point the phone toward and tells you what the bright objects in the night sky are. It's nice to use with a telescope. 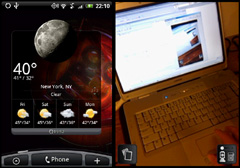 The weather application has some really, really nice graphics and gives the forecast information. It, like many of the applications that come with the phone, has a "widget" version that can be placed on the home screens.

The camcorder application shoots really nice-looking video at 320x240 resolution using MPEG-4 compression. It's not DVD-quality but it's space-efficient and shows enough detail to be worth using. The still-photo camera shoots 5 megapixel images and they look fairly decent as long as the lighting is adequate. It isn't quite as good as most stand-alone digital cameras but for a phone's camera it's nice. I used it to make a quick digital version of a document; after adjusting contrast and compensating for angle and distortion the photo because an acceptable version of the document. It was good enough for faxing, at least.

The highly customizable home screens allow a wide variety of widgets and shortcuts. I set it up with some icons for my most frequently called / messaged contacts, a widget for posting to Twitter, and a really smooth-looking clock.

More than anything else, the GPS applications have been the most fun to play with. A combination of GPS satellite, cellular tower, and known wi-fi access point beacons are used in an advanced, hybrid form of geolocation that is surprisingly accurate - most of the time.

Overall, I'm thrilled. The phone does lock up if I unplug the car charger from the socket before disconnecting it from the phone but the device is set up in a way where data is usually preserved in case of such a thing. For instance, the GPS application did not lose unsaved tracks at the end of a trip when I forgot to properly disconnect the car charger. Very, very nice.

I should mention that getting this phone required a new two-year contract with Verizon, which I was prepared for. I'm fairly happy with my service although I've expressed my frustration with their early termination fees (which are fair if one is getting a subsidized phone like I did) and a somewhat draconian policy of immediate service termination if the monthly 5 GB bandwidth limit is exceeded. This policy may have changed by now.

Android is, as you probably already know, a product of Google and I am a big fan of that company to say the least. They come up with good ideas even if they are cataloging every last piece of information about all of us. It's going to be interesting to see how Android phones evolve in the near future.

Last of all, I installed the Android SDK not only to get the screen shots used in this article but also to play around with developing some applications for this phone. It's an exciting development for mobile technology.