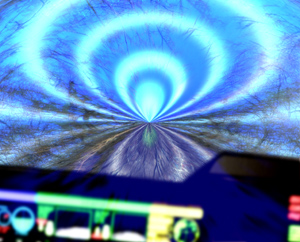 This is the best attempt I could muster at illustrating what a time jump might look like in the Hovercrane. Seen here is the view from the HC cockpit, while making a moderate speed jump of... let's say, about ten years. The Hovercrane is physically located just above some trees.

Before continuing, please understand that I am not a physicist.

In the image, the X and Y coordinates are exactly the same as what we'd see if the Hovercrane were just sitting still, without making a temporal jump. The depth, however, is unrecognizable as a projection of a 3D image because we're instead seeing a projection of X, Y, and T instead of the X, Y, and Z we're accustomed to.

The light and dark bands that emanate from the furthest straight-ahead point on the path we are traveling indicate an averaging pattern that is created from very tightly-spaced adjacent bands representing daylight and the near-darkness of night as days come and go down the 4th dimension. The tree branches warp and move because over the course of these days, the wind blows the branches and they otherwise change position over time. Remember, any change over time is visible on the Z axis now. You may notice that toward the end of the path, there's some green on the trees. We could assume that the current position inside the jump is at the very end of winter, where we can see some leaves sprouting on the tree branches right in front of us at the position on the time jump path that approaches spring, which is probably about 35-40 days from the Hovercrane's current location inside the jump.

The motion blur is not from the Hovercrane's rapid forward movement inside the jump, but rather a representation of changes in the tree branches' positions over time. The greater the Hovercrane's speed inside the jump, the greater the amount of time dilation. In other words, the Hovercrane will end up further into the future if it flies at 400 mph inside a ten-second jump than it would if it flew at 100 mph inside a twenty-second jump. It would end up at the same point in time if it traveled at 200 mph inside the twenty-second jump, however. Assuming that the Hovercrane flies perfectly straight and the time machine on board bends space-time so that the fourth dimension and the third dimension are perfectly swapped, one unit of distance would equal one unit of time.

Taking science fiction physics even further away from reality, the way the time machines (V-core and D-core) in 2214 create the dimensional transposition is by creating a series of resonating, high-energy electromagnetic emissions that affect space-time on the Planck scale. The amount of energy needed to resonate on such a small wavelength is ridiculous, but in the 2214 universe we assume that harmonics can work together to achieve this while having sufficient combined energy.

The dimensional transposition - remember, this is science fiction, and any real physicist would laugh at this notion - takes place by rotating this 3D 'bubble' in four-dimensional space 90 degrees. How this process takes place is beyond my ability to imagine; I'm further hindered by a lack of any true understanding of string theory. But, for the sake of science fiction, we assume that it happens.

Once this rotation is complete, the Hovercrane exists in a re-positioned pocket of space time, in which it can safely move out of the temporary bubble, which is destroyed once the beginning phase of the jump is complete. After traveling forward for a very precisely-measured distance and period of time, the time machine activates again and performs the same dimensional 'rotation', in reverse.